Good morning Saints! And happy Easter. I hope you are finding some ways to celebrate todaye, even if they’re different than what you’d normally do.

As I was thinking about it, it occured to me that it was exactly one month ago today that we decided to suspend in-person worship. It was also the time that many of us started making a concerted effort to stay home. In some ways it’s hard to believe it’s been a month, because it’s gone by so fast. And in other ways it feels like a lifetime. Those spending nine hours a day on Zoom can probably attest to that. But it’s interesting to think back on all that’s happened in a month.

Looking back, I think about how one of those moments it started to get real for me was when I saw pictures of the empty streets across the world. Major metro areas that we’re used to seeing in bumper to bumper traffic with roads totally vacant. Stadiums typically packed with people cheering, with only a lone janitor walking the stands. International tourist sites, like Times Square, deserted. There was something haunting about it, because that’s not how those places are supposed to look. It actually reminded me of that scene in the first season of the Walking Dead where the lead character rides a horse down the empty streets of Atlanta. It’s what we’ve come to expect from apocalyptic fiction. But not real life.

We’re in a time where there are images of emptiness all around us, which is interesting today on Easter Sunday where our defining image is also one of emptiness: the empty tomb.

It’s made me wonder what it was like for those women who went to the tomb that first Easter Sunday. What was the first thought that went through their minds? I mean, we look at it knowing the whole story and so it’s easy for us to look at the empty tomb as a positive thing. But what was it like for them? Looking in and seeing nothing where there should be a body? There might’ve been a very unsettling moment of “that’s not how this is supposed to look.”

It would’ve only been for a moment, though. Because soon it would become clear that what they were looking at was a good thing. What looked like emptiness was actually the space for something new to emerge. A new world that God was raising up. The world that Jesus came, and gave this life for, and called the kingdom of God. It was a world of love, justice and peace. A world of people looking out for each other; taking care of each other; not wasting their lives on the stuff that didn’t really matter and the me-based pursuits that get you nowhere. A world that understands that the true treasures of this life are made by God for everyone, and that there’s no reason (other than the blocks in our minds) that it can’t be.

This movement that could’ve very well stayed a 1st c. fad in Judea would now become a way of life spanning generations and geographical borders. And even though it’s been misinterpreted and misused by some, these ideas continue to ignite something in people. Encouraging that wild idea that yes, this kingdom of love and solidarity is possible.

And if that was the case with the empty tomb. What about the empty spaces surrounding us right now? This last week one of our parishioners posted a photo on Facebook that helped me begin to see them differently. It was actually a picture of the side of a big brick building with the following text displayed across the surface. It said:

People will lose jobs over this. Some will lose their businesses. And some will lose their lives. All the more reason to take a moment, when you’re out on your walk. or on your way to the stores, or just watching the news, to look into the emptiness and marvel at all the love. Let it fill and sustain you.” (from CHNGE.com)

Can we look at the empty streets the way we now look at the empty tomb? And see how really, there is so much there? Just as with the first Easter, I believe God is raising up a new world around us. And that this could be a turning point; a catalyst that helps us see and act. Right now we can see so clearly how systems that privilege the few — that they don’t take care of people — have failed us. We knew this, but it’s so much more apparent in the midst of a crisis.

And not only that but with what we’ve seen in our response to Covid 19: how quickly we’ve mobilized, changed nearly everything in our lives, and on a global scale. We’re getting a taste of just how much it is in us, and how much we’re collectively capable of. Whatever excuses we gave for why mass change for the good of the planet was impossible, this is dispelling that myth.

Right now as we have become more collectively organized around love and service, what could that mean for other things when all of this is over? What could it mean for the planet, for poverty, for other ills that take a staggering number of lives each year: heart disease, hunger, suicide?

And what about on a personal level? Right now, even with a lot of challenges, a lot of us are seeing some positive things happening in our day to day. You see more people out on walks in their neighborhoods enjoying exercise and the outdoors. People are finding time for things they never used to have time for — baking, gardening, those house projects that have been infinitely put off. Parents are getting more time with their kids and kids their parents. Neighbors and friends are checking in on each other more.

Some people are saying how they’re eating better or their blood pressure is down. There’s evidence to suggest people are having fewer heart attacks. Additionally, people are also finding out how to live more simply. Something we have given a lot of lip service to in the past, but now, we’re getting more judicious and disciplined in deciding what we need and don’t need. There’s also more gratitude. We’re not taking things for granted, and we’re getting better about thanking each other. And we’re becoming more attuned to how fragile life is, making peace with death, and thinking about what it means to die well.

We are in a decisive time. Some have called it our chance at a “reset” button. So it’s a really good time to think: What of these things do we want to take into our future? What do we need to let go of? What do we want to achieve and what kind of world shall we create? (Charles Eisenstein, "The Coronation")

I see this as a worldwide phenomenon, but I also believe there’s a special role that the church and our church is meant to play. Before this happened, All Saints was weeks away from hosting conversations about becoming a community hub in our neighborhood to host free concerts, speaker series, things that would bring people together around things that matter and have a place where they could get to know their neighbor.

A lot of the physical gatherings are on hold right now, as they should be. But those dreams of helping bring people together that God put in our hearts? We still need that. Maybe now even more. In this time of rebuilding, how might we help in the recovery efforts so that no one in our community and neighborhood is leveled by what’s happened? What if we all bear some of the sacrifice so that no one has to carry it all? How do we become a place of setting up the networks needed for this new world? How do we keep in focus the lessons learned during this time so that we don’t miss what they have to teach us and the transformation they can bring about?

None of this is to minimize any of what’s happened. It has been devastating in so many ways. And believe me, I’d much rather have you all in this room. And get to hang out for coffee after. But still, I’m also excited for what I believe God is doing right now. And what we’re being called to in all of this. And that it’s not just us. There are a lot of people sensing these same things. Attuned to what God is up to.

Today, on Easter Sunday, as we stand at our own empty tomb, we are all being called to imagine a new world shaped by solidarity and love. The kingdom of God that Jesus gave his life for. A more beautiful world than we’ve dared to believe possible. Whether the empty streets or the empty tomb, take time to look at the emptiness, and marvel at all the love. 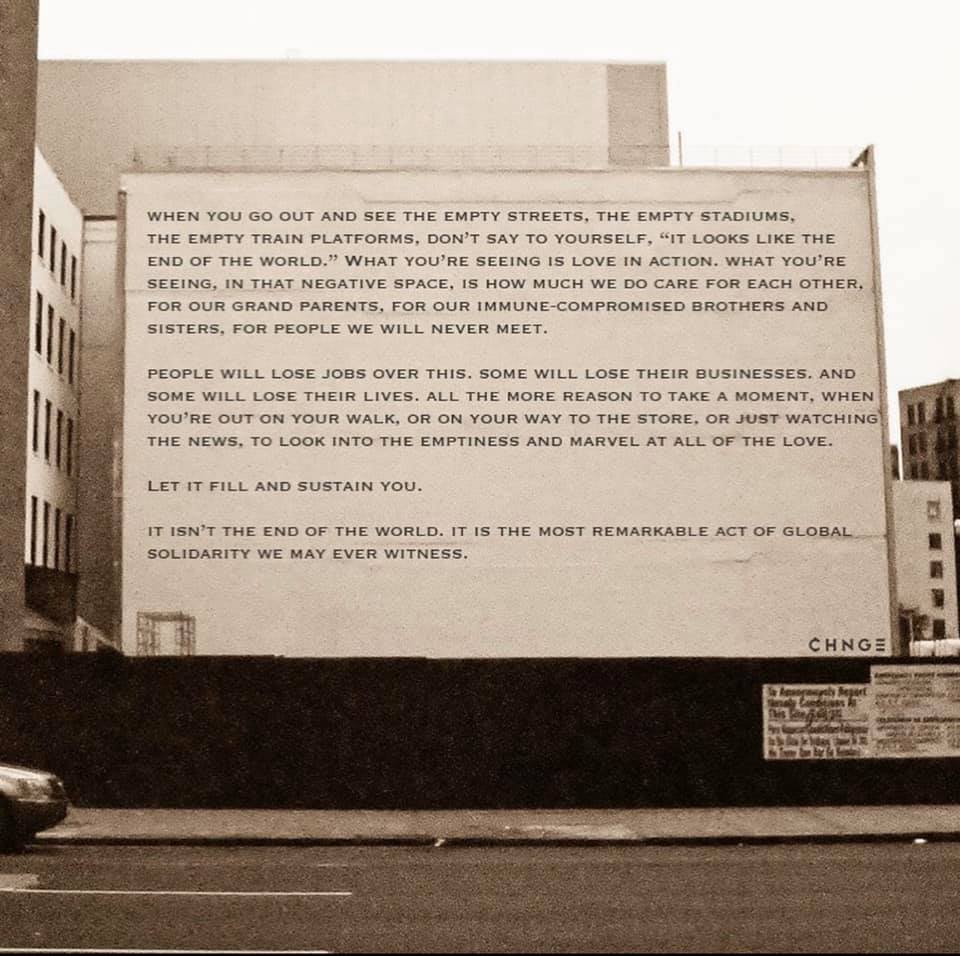