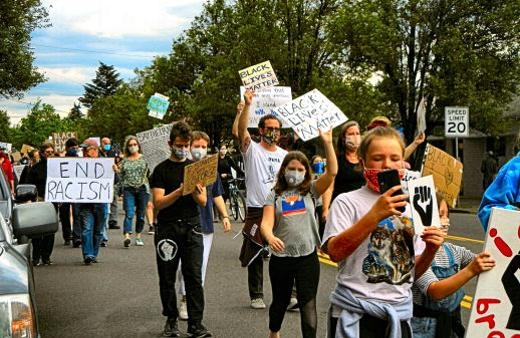 A family-focused group of an upwards of 2,000 people marched peacefully on Woodstock Boulevard on June 5 in support of the “Black Lives Matter” movement. Passing cars and a very large truck honked in support of the marchers. (Photo by Elizabeth Ussher Groff)

While “Black Lives Matter” demonstrations were being held downtown, as well as throughout Oregon and even the nation – at 5 p.m. on Friday, June 5th, an estimated one to two thousand people marched east on Woodstock Boulevard from S.E. 40th to 52nd Avenue.

As marchers flanked the sidewalks, pushed strollers, and rode bicycles, there were no disruptions nor need for police. A few cars tried to wend their way through the crowd, or turn from the boulevard onto a side street, but there were no mishaps, and a car lane remained open on Woodstock Boulevard.

Wearing protective coronavirus masks, carrying signs, and physically distancing as much as possible, the predominantly white band of adults and children of all ages chanted “Black Lives Matter” for the ten blocks.

The plan for a march had been publicized on fliers in the neighborhood, on social media, through neighbors e-mailing other neighbors, and at the Woodstock Neighborhood Association meeting a few days before.

In addition to expressing support for police reform and an end to systemic racism in the U.S. and around the world, it seemed that neighbors were also relieved to get out together, after having been in relative isolation for almost three months due to COVID-19 pandemic restrictions.

Publicized as a family-focused and “intentionally quiet” march in solidarity with those in mourning for the life of George Floyd and other black men and women who have been unjustly killed by police, it was low key – but not exactly quiet. A drummer kept beat with the chanting, as everyone turned around at 52nd Avenue and returned westward to All Saints Episcopal Church at 40th Avenue where the march had begun. Cars and several large trucks honked loudly in support as they passed by.

All Saints was not a sponsor of the march; but the main organizer – Woodstock resident Jake Dockter – started attending the church a few months ago, and remarked to THE BEE that he is impressed with the church community. The Rev. Andria Skornik, who has been priest and rector of the church for just over a year, helped publicize the march, and agreed to allow the church parking lot as the gathering spot.

Dockter describes himself as “a writer, reader, father/husband, and hopeful activist,” adding, “I am a parent of a 6 and 3 year old and we have been trying to talk to them about these issues. It is important for us to show our kids ways they can get involved and how they can learn about compassion and justice. I am a white neighbor and need to acknowledge my own place in this system. We are complicit and need to dismantle so much.”

While planning the march, Dockter and others had been expecting perhaps 100 people to show up. “I was amazed by the number of people. All were people I recognized from the neighborhood [where Dockter has lived for eight years], or my daughter’s school, or the library. The Woodstock and Southeast neighborhood really showed up to say, ‘Black Lives Matter’, and to voice our call for police accountability.”

Woodstock resident Jessica Nelson, who had never been to any protest or march before, attended with her five and seven year-old daughters. “They asked a lot of questions along the way like children do, and I just kept telling them that we were marching because of the ‘Black Lives Matter’ movement. They were confused at first where we were marching and why we were silent (besides those honking cars). We told them it was as a sign of great respect to a man's life who died. My husband and I have taught them to choose kindness and love and treat everyone as equal.”

Sara Kirschenbaum, who once organized 200 peace groups in Ohio in the 1980’s, told THE BEE, “We walked out our front door, and we couldn't believe what we were seeing – people were pouring into the street from all directions… The care and creativity that people put into their signs were amazing. I was so astonished that this predominately white neighborhood seemed to care so deeply about black and brown people!”

Asked about his hopes for the future, organizer Dockter replied, “Look at what is happening in Minneapolis. Change is already underway. Look at Portland Public Schools, addressing issues of armed officers in schools. This shows pressure and action can impact and make change. In Portland, and Oregon, we can drive change for our community. It is crucial that these communities stand and follow the lead of Black leaders and their call.

“For folks interested, they can e-mail – [email protected] – to discuss ways we can work together,” Dockter concluded.

Currently we are streaming our 8am and 10:15 am Morning Prayer service on Facebook Live.
If you have a Facebook account, simply go to https://www.facebook.com/allsaintspdx/ at either of these times to participate.

A Note from Your Treasurer:

Here are three ways to give while in person services are suspended. We sincerely appreciate your generosity in support of All Saints, and together, we will continue to do God’s amazing work.