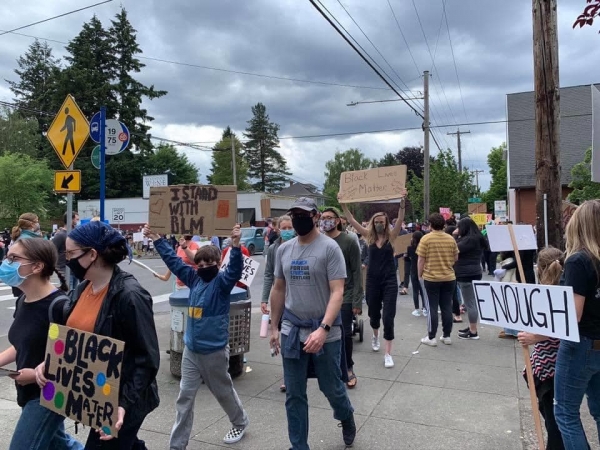 This morning I want to talk about the historic moment our country is in and how we might see it as people of faith. But to do that, I want to start with a story from the Hebrew Bible from the time when David was king of Israel.

If you’ve heard the story of David and Bathsheba you know she was a woman King David desired and brought to the palace while her husband Uriah was off at war. She then became pregnant, which David tried to cover up by bringing her husband back from battle to be with her.

But when Uriah refused, saying it was unfair to all of the others still fighting, David had his commander put Uriah on the front lines and then withdraw the other men so Uriah would be killed. David then took Bathsheba to be his wife. The baby was born. The public scandal was avoided.

That’s the background, but here’s the part you need to know for our purposes, and that is that one day after all of this had happened the Lord sent a prophet named Nathan to David. Nathan was a trusted advisor. He said to David, I want to tell you about something, and see what you think about it.

Then Nathan told him a story. Of how there were two men in a town: one rich, the other poor. The rich man had lots of sheep and cattle, but the poor man only had one little ewe lamb. He loved this lamb. It shared his food, drank from his cup, and even slept in his arms. The text says it was like a daughter to him. One day, when a traveler came to visit the rich man, the rich man didn’t want to take one of his own sheep for the feast. So he took the lamb that belonged to the poor man and prepared it for his guest.

Now at that point in the story, David had heard enough. It says he burned with anger, and interrupted saying, “The man who did this must die! He must pay for that lamb four times over, because he did such a thing and had no pity.” Then Nathan said to David, “You are the man!” It was a story about David.

What if someone told you a story, about a man who was killed by a police officer for no reason, slowly and callously. Like David, you’d be outraged. You’d say, something needs to be done.

But in our case, the story is true not by analogy, but by what actually happened.

Right now in our country, I’d say that many of us are having a David moment. The injustice was always there. We knew about it. In many cases we were part of it. But this time, it’s get more people’s attention; eliciting the kind of response that should’ve been there all along.

In the past we might’ve excused it, saying the officer was a bad apple; it was a split-second decision made in self-defense; or the victim must’ve done something to deserve it. But with the events of these last few weeks we see — like in the cases of Amaud Arbery or Breonna Taylor —

they didn’t do anything. Taylor was sleeping in her apartment. Arbery was on a jog. Taylor’s death went mostly unnoticed. And Arbery’s would’ve also, with no consequences for the men who shot him, were it not for the video.

Then in the recent video of Amy Cooper, we see the instinctual way a white woman knew that a man’s blackness could be used against him like a weapon. Or in the case of George Floyd, the video shows the officer didn’t fear for his life. That there was no reason for such force. Not to mention, he’d had 18 prior complaints. That he could’ve stayed in that position with that record shows not how exceptional this instance was, but that it’s part of how the system works. And we can acknowledge that there’s a problem without denying that there are also good people in law enforcement trying to make these changes.

TV host Trevor Noah described all of this coalescing as a perfect storm of events. One that’s caused many of us to see with more clarity what some have always known. Which is how evil racial injustice in our country is, that white Americans have benefited from things staying the way they are, and that most of us have not done enough to bring about change.

We’re seeing that like the poor man and the sheep in Nathan’s story, black Americans are living with the reality that what they love can be taken for no reason and with no justice or accountability. It’s the fear black parents have had to live with as they teach their children that they can’t wear hoodies, that they have to keep their hands visible at all times, that they should expect different from their white friends. And as much as we’ve hated knowing that that’s the way it is, still it’s been tolerated.

In Letters from a Birmingham Jail, Martin Luther King said, “I have almost reached the regrettable conclusion that the Negro's great stumbling block in the stride toward freedom is not the... Ku Klux Klanner, but the white moderate who is more devoted to "order" than to justice.” He wrote these words in 1963, but it’s taken this long for enough of us to see that the person he’s talking about is us. That we’re ones getting in the way. In our complacency, we’ve shown that we’ve loved order more than justice.

But that’s not at all how it is for God. Scripture is unequivocal that God hates injustice. In the story of David it says how much what David did angered God. The prophetic texts are filled with pages of God’s indignation when people are mistreated by those in power. Jesus’ throwing over tables at the temple was an example of his outrage at those who were scamming the poor.

And he warned religious leaders for neglecting justice.

God loves justice. And throughout scripture we are urged to love and seek it, as well. In Micah it says, “What does the Lord require of you but to do justice, love kindness, and walk humbly with your God?” (Micah 6:8). In the psalms it says, “Give justice to the weak and the fatherless; maintain the rights of the poor” (Psalm 82:3). In Isaiah it says, “Learn to do good; seek justice, and correct oppression” (1:17).

And this is fully consistent with the message of God’s love. Because there is no love without justice. You cannot truly love someone you’re not treating right, or if you’re turning a blind eye to wrong that’s being done to them. You also can’t love someone you’re not willing to call to justice if they’re wrong. Remember God loved David by sending Nathan to hold him accountable, and Jesus loved the religious and civic leaders by challenging their abuse of power.

All of that leads me to believe that the way we’re feeling right now is right where we’re supposed to be. As hard and as painful as it’s been to get to this point, I hope we can see that there’s something good about the outrage we’re feeling. That there is something holy in our discomfort. Because there’s something wrong with the way things have been, and we need to be moved to do something about it.

Just as David’s burning with anger is what brought his repentance, we need to repent the sin of racism. The Greek word for repent in the Bible means to turn, and we need to do a 180 as a society and go in an entirely different direction. We cannot give back the lives that’ve been taken. But we can do what we can to make things right from here on out, and make sure this time it’s different.

So what does it mean for us to go in a new direction? You’ve heard it before, but it bears repeating. We must educate ourselves on the history of race in America and on the subtle, unconscious ways that white privilege is perpetuated. We must get behind groups that are doing the work of racial justice and police reform. Especially those led by people of color.

For white people, we must get out of our comfort zones to learn what it means to really be an ally, and in our relationships with people of color not to work through our issues or white guilt in a way that makes us the victim. We also must make change where we can. With calls to our representatives. With our votes. We must keep in mind how there’s still so much that can happen at local level.

We also shouldn’t sell ourselves short, saying “I’m just one person. What difference can I make?” One thing you hear from people who work in government is that they’re always hearing from antagonistic people on the extremes. But they need to hear from people like us.

And we must try. This last week, Marcus Mundy, The Executive Director for the Coalition for Communities of Color told me, “It’s always better to try doing something positive than to do nothing. And we need people in Woodstock and in your congregation in this. A call from you to your representatives would mean a lot.”

This Trinity Sunday, as our Genesis reading reminds us that we are made in God’s image, we can see our outrage at injustice as part of how we bear the image of God. Or, as it was summed up by our presiding Bishop Michael Curry in an op-ed this last week, he said, “When I think about what love looks like, I see us channeling our holy rage into concrete, productive and powerful action.”

My prayer today is that we would love justice like God loves justice. That it would be different this time. And that this holy outrage would put us right where God wants us to be.

Currently we are streaming our 8am and 10:15 am Morning Prayer service on Facebook Live.
If you have a Facebook account, simply go to https://www.facebook.com/allsaintspdx/ at either of these times to participate.

A Note from Your Treasurer:

Here are three ways to give while in person services are suspended. We sincerely appreciate your generosity in support of All Saints, and together, we will continue to do God’s amazing work.