The Unexpected Path to Peace 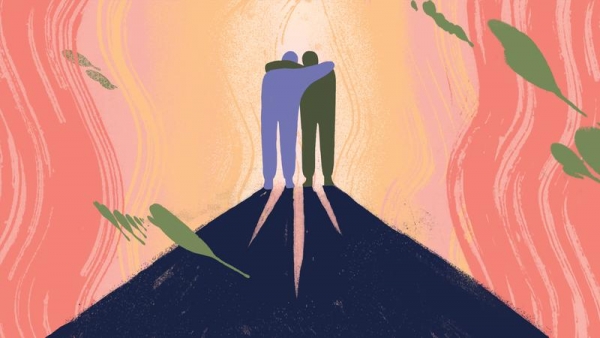 For many of us, this morning’s passage from Matthew is not one that we enjoy hearing (perhaps especially on Father’s Day of all days). We hear it and wonder, is Jesus saying that we should be at odds with our families? That there’s something wrong with peace? Or that violence is okay?

It might make us think about other parts of scripture that seem at odds with what he says here.

Like passages that call Jesus the Prince of Peace. Or, at multiple points, when he talks to his disciples about giving them his peace. Or in the Beatitudes where he says “Blessed are the peacemakers.”

His reference to the sword might make us think of all the non-violent aspects of Jesus’s ministry. Like where he tells his followers to turn the other cheek. Or when he gives his life rather than encouraging a violent revolution that many were hoping for.

What he says about not bringing peace might make us wonder how that squares with God’s larger vision of reconciliation, such as in prophetic texts like Isaiah that imagine a peaceful world where all weapons are turned into tools and humans and animals live in harmony. Or in the very practice of Communion, which is a meal that’s meant to bring us back to God and each other.

And what he says about the family here might make us wonder how that fits with other parts of scripture that call us to healthy relationships in our families telling children to obey their parents, parents to treat their children well, and spouses to show each other respect and mutuality.

It’s good to keep these other passages in mind when interpreting today’s text, because through them we see how it wouldn't make sense for Jesus to be promoting violence, or family feuds and division for their own sake. These things are not the goal. What he is saying is that the gospel he brings is challenging, and, as a result, it will divide people.

As we know, his gospel was about helping people live lives of love, freedom, and peace. But you can’t get to all of that good stuff without first addressing what’s getting in the way of it. Things like sin and injustice. Sin and injustice also happen to be things that people usually don’t want to talk about. No one likes to be told what they’re doing is wrong, or face the fact that they’re hurting someone else, or come to terms with the fact that they might have to change and let go of something they don’t want to or feel like they can. Confronting our own sin is not a fun experience. It can bring shame. It can make us feel like we need to defend ourselves. If the sin is corporate or systemic sin our tendency might be to disassociate, to say that’s a problem over there, or what am I supposed to do when other people are ones doing the real harm. And in looking at those hard things, some of us just won’t want to go there. We’ll think, why disrupt things, especially if from our perspective things are good. But it may in fact be that things are good for some and not for others, which is a false sense of peace.

So then Jesus saying to his followers, “Don’t think I come to bring peace but a sword,” is like a heads up preparing them for what they need to expect. That yes, they’re working towards a world of justice, peace, and freedom. But to get there, there will be times when it looks like the very opposite. So they don’t have to be afraid of it or avoid it, but see it as a step along the way to something better.

This “heads up” is good for us to have in mind, too. Because while none of us wants disruption, turmoil, or conflict, what Jesus says helps prepare us for those times when it’s necessary for getting us to where God wants us to be.

There are going to be times when this is crucial for groups that we’re part of or relationships we’re in. Like in a family or organization, there might be an unhealthy person or unhealthy patterns that have been enabled over the years. For the sake of equilibrium everyone has to adjust to the bad behavior, and keeps perpetuating it, even if it’s hurting those involved. To address the bad behavior will almost certainly disturb that equilibrium in the short term. It may bring about the kind of division Jesus talks about. But in the long term it’s how the individual or group gets healing and moves into a better space.

There are also times when what Jesus is talking about is needed in our churches. Sometimes we tiptoe around each other, we don’t say things that need to be said because we don’t want to offend each other. I was reading something posted by a faith leader this last week describing how her denomination was debating whether or not they should talk about the sin of racism. She lamented that it was being discussed as though it was a choice rather than a gospel imperative; as though it may be better for the church to continue in something destructive rather than upset some of its members. And yet, the hard conversations are part of what it means for us to be the church.

Additionally, there will be times we need to come back to what Jesus is saying, because we need to examine the way things are, and ask if things are good or if they’re just good for some people.

This type of examination takes some of the most courage, because not everyone will understand it or want to enter into that difficult territory. In fact, this month as we celebrate Juneteenth and Pride, we remember some of the people that had to push for civil rights and inclusion when it wasn’t popular and at great sacrifice. As we do, we can think — who are the people doing this very kind of work right now? What does it mean to take the issues they are raising seriously in the present?

The gospel that Jesus brings will challenge us. It will challenge our relationships. It will challenge the organizations and systems we find ourselves in. It might bring division, And it may not be peaceful at first. But so often it’s how we get to a place of real peace. It is part of how God heals us, reconciles, and makes us whole. It’s kind of like what happens with a broken bone heals the wrong way, with the two ends not lined up correctly. When this happens, maybe you can get by, but with limited function. It may be painful, but the kind you can live with. Just as we can get by and manage living in a state of false peace. To correct the bone you have to have surgery, which is like confronting the problem, and that will cause more pain at first. But if you do that, over time it will begin healing properly, you’ll get a full range of motion back, and you won’t be in chronic pain. The short-term discomfort of the surgery and physical therapy are worth it for the true healing that happens over time.

In a similar way, are we willing to accept the sword that Jesus brings and undergo the initial difficulty and even pain for the true peace to come through? Are we willing to look at where we may be wrong? Are we willing to speak truthfully to one another if we think someone’s on the wrong path? Loving them enough to say something. And are willing to do it as Jesus did, which was always from a place of humility and service. Not looking down on those he challenged, but coming alongside them in the difficulty and with compassion.

In our relationships, our communities, in the places we belong, and the places we help build, may we have the courage to seek real peace, knowing what it takes, but also where it could take us.