Vigilance in Our Love 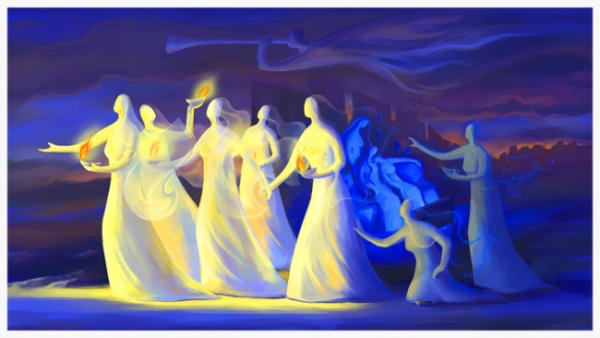 What a week it has been. We had the national election. Then four agonizing days of waiting for the outcome. And finally, the announcement of president-elect, Joe Biden, and the very first woman, Black, Asian-American, and immigrant born vice president-elect, Kamala Harris.

Now that we are on the other side of the election, I’ve heard newscasters, historians, and politicians from both major parties say that now is the time to heal our country. And, in such a time, where we might look to scripture for comfort or direction — a word that might help us transcend our differences and see our way to the common good — today’s reading had to be one of only instances in the gospels where the characters are pitted against each other, selfish behavior is rewarded, and it ends with half the group missing the party, left out in the cold.

Thankfully, this is one of those instances where context makes a big difference. For example, this parable isn’t in any of the other gospels but Matthew, which increases the likelihood that it was written specifically for the Matthean community. This was a group of people who believed that Jesus would return while those who witnessed his ministry were still alive. But now, roughly 50 or 60 years after his death, those people were dying. Life around them was in upheaval. There had been wars between the Jewish people and Rome and the Jerusalem Temple — their sacred space and hub of worship and community life — had recently been destroyed. This would have devastated Jews as well as Christians, many of whom saw their religion as a movement consistent with Judaism.

Understandably there was fear, disillusionment, and some were questioning their faith. So Matthew uses the parable as a way to address those concerns. Through it, he calls his community to vigilance; urging people not to become indifferent or lackadaisical in Christian practice, which would be like bridesmaids who’d go to an important event unprepared. He’s essentially saying don’t give up believing or doing what God’s called you to, because you don’t want to miss Christ’s coming, the coming of the kingdom when it does happen.

In Thessalonians, we see Paul addressing similar worries. The community he was writing to also believed Christ would return in their lifetimes, and they were trying to understand what deaths of the loved ones meant. Were they not faithful enough, what they believed wrong, was Jesus wrong or did they misunderstand what he was saying. To this anxious group, Paul assures them that those who have died WILL still see Christ’s return because they will rise again. Here Paul, like Matthew, is trying to keep people engaged; trying to explain how even though things look different than they thought, God’s promises haven’t changed.

We know the pain of life taking a different turn. This year we know it all too well. And we’re tired of it being this way. We’re tired of the tense relations in our country. We’re tired of living in a system meant to fail black people, brown people, LGBTQ and poor people. We are tired of not being able to gather in the same space as a church, a school, as family and friends.

From this place, we can relate to this ancient community of believers and thus benefit from what Matthew had to say to them. Which is, when we’ve lost faith, when we’re tired and feel like we can’t go on, in these moments especially, we need to stay vigilant. We need to stay engaged. We need to plan for the long haul, like those bridesmaids who came ready because they were determined to get to the party.

Now, to be clear the agape love of Christians scripture isn’t merely a call for a warm, fuzzy moment. Unlike eros — erotic love, or phileo — friendship love, agape love is a choice. It’s a decision to love, and make the other’s interest our own, regardless of how we feel about them. Paul describes this love in his letter to the Corinthians. We’ve heard this passage before, but listen to it and imagine this love in response to the moment we’re in. He says, “Love is patient, love is kind. It does not envy, it does not boast, it is not proud. It is not rude, it is not self-seeking, it is not easily angered, it keeps no account of wrongs. Love takes no pleasure in evil, but rejoices in the truth. It bears all things, believes all things, hopes all things, endures all things.” Imagine us aspiring to that kind of love. Seeking change, seeking healing, seeking the end to needless suffering and injustice, and all while doing it with the love Paul describes.

Vigilance in the love of Christ is a powerful thing. And our Presiding Bishop, Michael Curry made a passionate call for this on the Today Show this last week. When asked how we heal this country, he called attention to how — on the United States seal — it says E Pluribus Unum, which is Latin for “from many diverse people, one.” It actually comes from the writing of Cicero to the Roman Republic, which says, "When each person loves the other as much as himself, it makes [e pluribus unum] out of the many one.”

Curry said, “When we make the decision that, ‘I care about you as much as I care about myself, then out of the many one becomes possible; and that is how we heal this country.” He also encouraged us to ask ourselves, “What am I gonna do today that’s going make e pluribus unum real; What am I going to do today that’s going to bring this nation together? Not every day, but today.” What he suggested is a good way of taking something that many of us have worried about — this question of where do we go from here.... how do we heal — that is big and overwhelming, and bringing it into a present, tangible act that we all can do. Which is making daily decisions to love. Not that we can’t disagree with each other or have a place for critique. We need that. But that in it all, we’re not going to lose sight of the other person as a human being. We’re going to find a way to care for each other as we care for ourselves.

In doing this, we can pursue ambitions of gospel and our nation in tandem: Or, as Civil Rights Leader John Lewis put it in his final letter to the American people, “Democracy is not a state. It is an act, and each generation must do its part to help build what we called the Beloved Community, a nation and world society at peace with itself.”

Though the parable of the ten bridesmaids may not be the one that we would choose for today, we can still heed its call to vigilance. If we stay vigilant in things we know to be true, and the things God has called us to, unlike the bridesmaids who felt they only had enough for themselves, if we stay vigilant in our love, we’ll find a way to get there.

Like if those bridesmaids had linked arms in the darkness and shared their light.

Our 2021 Stewardship Campaign Pledge Drive is underway right now. If you would like to make a Pledge to help support All Saints Episcopal Church, click on the Make a Pledge Button below.